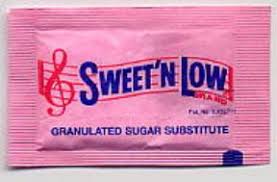 Saccharin was the first of today’s most common non-nutritive sweeteners to hit the market. It is sold as “Sweet ‘N Low” and is found in some commercially prepared foods, though not many.

Originally, there were warnings on saccharin-containing foods because of its potential carcinogen effects. These warnings have been removed because saccharin is now considered safe (tests proving saccharin caused bladder cancer in rats did not translate to humans) but there is still a question as to whether there is a ‘threshold’ beyond which saccharin may have carcinogenic properties in humans. Most scientists agree that saccharin is safe for human consumption.

Saccharin was originally used to sweeten diet soft drinks but aspartame ended up taking its place since it tasted better. Saccharin cannot survive under high heat conditions, so it does not work well to use in any foods you must cook. You can find saccharine in gum and some over-the-counter medicines.

My recommendation: Remember that saccharin, as is the case with most artificial sweeteners, is a chemical, so enjoy it in moderation and avoid it if you are pregnant.