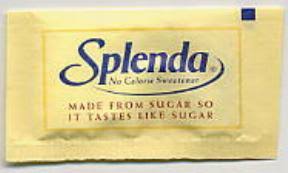 The next “non-nutritive” (calorie free) sweetener I want to discuss is Splenda. Splenda (or sucralose) is a sweetener we’re hearing more about and seeing in a variety of sugar-free treats and desserts. In order to create sucralose, 2 chemical groups are removed from sugar and are replaced with chlorine atoms (yes, chlorine). While no studies have shown that sucralose bleaches your insides there aren’t many long-term studies out there yet since Splenda has not been around very long. So far, most research has been positive towards sucralose as a way to sweeten foods without adding calories.
Alot of people have commented to me that they taste an aftertaste but I have noticed that, for most people, the aftertaste seems to go away after you’ve been using sucralose for awhile.
A side effect that has been reported is leg cramps in some individuals. While this doesn’t happen to many people, a few people have experienced leg cramps.